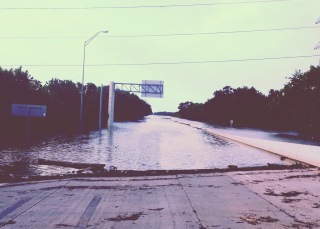 I’m coughing myself to sleep on howling steps that were once the Gateway Arch in St. Louis, pillowed by the tombstones of Louis and Clark, spooning the mummified corpse of Sacagewea. I can see twin towers covered in fuselage and the dead men they swallowed. Before that we didn’t do ruins.

Now we are the modern Pompeii buried beneath newspapers and motel sixes, beneath brick and stone and the bones of Pharisees and Wall Street Brokers.

I’m foreign in a familiar land. I’m a bookless, homeless, bombed-out, burned-up pioneer in a dead world made of dead words facing a sea-washed statue liberated from meaning, her flame out, her arm stretched in the air as she sinks in the sand. Over there is a mountain with four worn-away faces, there’s Washington’s limp phallis, a white house sick with the blood of Indians and presidents. I start to think this is all one big middle finger to whoever came up with the phrase ideas never die and the phrase I’d give you the shirt off my back and to whoever thought democracy was immortal.

And I know the devil’s been most patient.