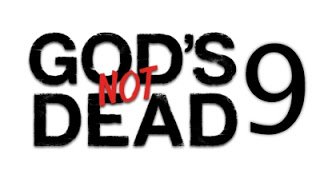 Senator Hurpkins walks into his office. He looks unhurried, self-assured. All of his secretaries, even the male ones, are huddled around Janet’s desk. Janet looks at him urgently. “Bill, you got to see this.” Hurpkins takes the document she’s holding and looks at it closely. “No,” he says. “That’s not possible.” Janet explains what he’s seeing because movie audiences don’t read good. “They want to delete God’s name from the Constitution. The Constitution.” (The film takes some liberties.) Hurpkins is visibly upset: “NOT THE FUCKING CONSTITUTION. Not on my watch. NOT ON MY WATCH.”

Quick shots of the Declaration of Independence with black highlighter over “Nature’s God” and coins dropping on a counter which read “In Nothing We Trust.” Elementary students recite the pledge of allegiance, skipping “under God.” Scenes of Senator Hurpkins filibustering in front of Congress with an earnest Mr. Smith Goes to Washington desperation. A narrator voiceover: “When the United States of America decides it wants to erase every mention of God from the country, Senator Hurpkins is the only politician willing to fight back. But at the end of the day, Hurpkins has to ask himself, in WHO does HE trust?” Cue the same shot of coins dropping on the counter. Narrator: “The stakes have never been higher.” A fancy dinner party, people are eating steaks. The pun is unnatural, forced. Narrator, again: “He will have to defend God in front of every enemy imaginable. Democrats. The Liberal Media. Planned Parenthood. And… himself?” Hurpkins, kneeling in the street, holds the dead body of Janet. She’s been hit by a drunk driver. He takes a swig of a bottle of Scotch and shakes his fist at the sky. Onscreen, cue the words: “God’s Not Dead 9.” Narrator: “This holiday break, you’ll have to SEE IT to BELIEVE IT.” 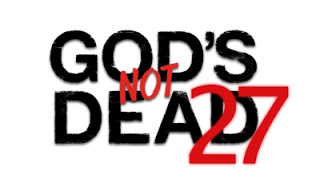 A funeral. A procession of grim-faced men bearing a casket on their shoulders. A circle of mourners as the casket’s lowered into the ground. A shovelful of dirt lands on the lid, now placed in its grave. An onlooking celebrity, maybe Tom Hiddleston, holds an umbrella over a crying widow and says, “I can’t believe he’s gone.” His companion, hopefully John C. Reilly, not because he’s perfect for the part, but because I really like John C. Reilly, he’s just a great guy, he’s funny, plus when you see John C. Reilly in a movie you know that at least it’ll have some excellent comic relief, looks around curiously, “What’s that sound?”

The sediments on the casket are vibrating like at the end of Superman v. Batman. Whatever’s inside is alive and powerful. Cut to black. Onscreen, cue the words: “God’s Not Dead 27.” Tom Hiddleston says the arc words, “He has not abandoned us,” which have a haunting, poetic effect.

Little girls jump-rope. Some teenagers jump into a cherry-red Lamborghini Aventador (careful product placement which should pay for half of the movie). Dads mow their lawns and wave impotently at each other. The mediocre tranquility of the Suburbs. Narrator: “The kids of Sugar Creek don’t know it yet, but something is coming to get them.” An actress in her late twenties who’s playing a freshman in high school wakes up coated in fear-sweat. Sexy fear-sweat. The actress, Jennifer Lawrence or maybe new talent, runs downstairs. “Mom! MOM!” she shouts. Mom grabs her by the shoulders: “What, what is it, my little hushpuppy?” The actress has no time for cute names: “I saw him! I saw him!” “Who?” The girl sobs into Mom’s wool cardigan: “I saw God.” The Mom stares enigmatically into the distance as if struck by old but traumatic memories. “Dear Lord,” she says. “He’s back.”

A montage of scenes with teenagers in the grips of terrible, divine events. A teenaged boy, screaming. There are holes in his hands. A girl being dragged up the wall, her arms splayed, her body forming the shape of a tee. Fresh blood on a wall which reads: “Repent.” Then a celebrity, undoubtedly Nicholas Cage, in fact it can’t be anyone else, it has to be Nicholas Cage, drives down a freeway at high speeds, a pistol in each hand pressed against the steering wheel. Nicholas Cage has a face that means business. Cut to Paul Giamatti in an orange prison suit, speaking to Cage from behind a pane of glass. Giamatti: “He’s coming for them!” Nicholas Cage hangs up a phone and walks away decisively. Giammati keeps shouting: “He’s coming for them all! The Lambs of God! Lambs for the slaughter!” Narrator: “No one knows where it came from, or who it will visit next.” The police dredge a body from the river as a dove lands beside red-and-blue flashing lights and watches menacingly. A teenager opens a drawer, sees a Bible, screams, shuts the drawer. Narrator: “God is Not Dead 59: Die Harder.” We see the actress from before crawling down a hall. The shadow of a robed, bearded man falls over her. A powerful voice, maybe Liam Neeson, maybe Benedict Cumberbatch, says, “You are all my children now!” The trailer cuts to black and dark laughter.