Half-a-year ago, I was contacted by Z Publishing about contributing to their “Emerging Writers” series. Having launched a successful run of “Emerging Poets,” the publishing house was seeking to publish new writers from every state in what they called a “sampler platter.”

I was ecstatic. I penned a flurry of fiction and plagued critique groups for several months. There were no specifications on genre, so my pieces were strange and speculative. One was about monks hunting a bear in an underworld library and another was about a man buying terraforming equipment.

Z selected “House Divided” from my slush of submissions. The story is about a recent divorcee ruminating on her home, which, instead of being given to her or her ex-husband, has been split interdimensionally between them. In essence, her husband has become her ghost, a reminder of a life lost to the vibrations and footsteps emitting from her walls. 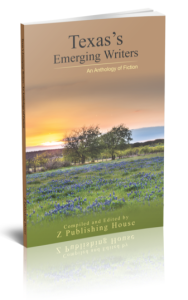 So here we are—with my plug. There are two anthologies from Texas. Mine’s the tree behind bluebonnet, a hazy sun on the horizon, pink-gray clouds smearing the sky. I’d be honored if you purchased a copy.