Every writer has several projects initiated with gusto, abandoned with reluctance. My first was a forty-page novel in middle school—a Lord of the Rings knock-off called The War of the Bowl. In high school, my friend Jon Ying and I devised a western desperadoes-and-dragons webcomic called Dustbound. In college, I wrote rough drafts and buried them in the rough. Even now, as I revise my novel, I fear its future in a back-folder on Dropbox.

As I enter my old age (I’ll be 30 in August), I have this sudden compulsion to blog these failures. Not in despair, not desperation, but as an accounting. A mid-life cleaning instead of mid-life crisis.

This will be the first of a few posts on some hiatus hells. Today, I’d like to explain Desmorious, a blog about Philosophy and the Fine Arts that started and ended in 2018.

Why did I end it? Simple—I lost the time and composure to update the blog.

Why did it start? Well.

This site (Desmond, Write and yes, this is a link to the very site you are reading) is where I post my fictive fits and Bad Writing Advice is where I deliver um really good writing advice. But I’ve yearned for a platform for academia, philosophy, literature, science, and the humanities. Someplace undiluted by self-promotion where I could post the work of better minds.

What I desired was a site devoted to regurgitating great texts, to re-popularize significant advances in the arts, humanities, and sciences, to seek virtue, truth, and beauty (what T.S. Eliot calls “the permanent things”), to no longer “neglect Monuments of unageing intellect,” to reinforce the moral foundations that keep us sane and spiritual.

(How is it possible that by March 4th, 2019, philosophyshit.com remains available? Someone more sensible than me get on that.)

Branding on the interwebs is tricky. Any weirdo can buy a url and keep it for a sustained amount of time without posting anything (for example: Bad Writing Advice). Prices can range from $8/year to a one-time fee of $10,000. Greenthink.com, for example, was $8,000 when I was browsing, but Greenstink.com was only $10/year. For some reason.

I also started designing a logo. My first (and only) thought was a brain pinned by an arrow. My thinking was—if an arrow through the heart signifies the pains of love, then an arrow through the brain must signify the painful realm of reason. (It helped that loveoflogic.com was available.) Instead of Cupid, I imagined the bolt came from Apollo.

Om Prekash did the dirty digital work. It was his idea to change the arrow to a pencil. 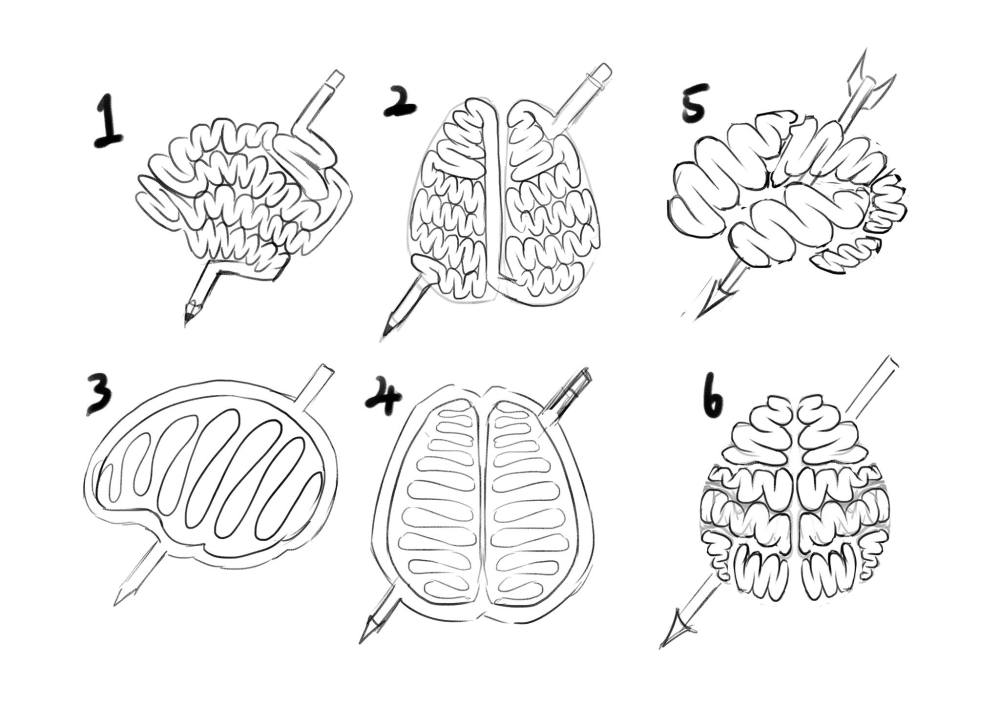 So the logo was coming along. I just needed a brand. My thoughts struck on thoughtstruck.com, but it was unavailable. Mindstruck was too grand (and two grand). I also considered:

Around this time Prekash began narrowing the design.

I chose #1, despite my wife’s warning that it looked less like brain, more like sushi. I guess I hadn’t considered how gross brains actually look with their wrinkly, pink contusions. Slim over slime, I thought. Let people read my blog and not lose their lunch.

Then I found it. The perfect url:

Unfortunately, the url didn’t reflect my purpose (or sexual orientation). I finally chose Desmorious, a mixture of memorious (memory; monument) and moniker. Remember when I said I wanted a place “undiluted by self-promotion?” I must have been lying to myself.

And I created the site. Made a few followers. Posted posts. But content lagged. Moving to a new state and starting a new job were not fertile grounds for scholarship.

Let this be its epitaph.