Phil Kiner and I took one last crack at the concepts we created in GLADiators and Mudball. This time, I had a completely new setting and conflict for our ball-kicking, mud-rolling, tomboy protagonist:

Lord of the Flies… in space!

Essentially, the premise was this:

A cargo ship carrying children (refugees from a planetary invasion) crashes on an unknown desert planet. The ship’s automated servants (called meks) activate Emergency Protocols, which includes creating machine-emitting air-bubbles on the surface, but otherwise the ship does very little in terms of leadership or guidance. It’s up to the rally of children to stay alive, create a functional society, and plan for rescue.

But she was joined by new allies.

Zettle would be an excitable girl with a ferocious curiosity for new things. She’d constantly hurtle herself into danger (or over cliffs), pursuing impulses and inquiries with physical abandon.

We wanted her to represent the poor working-class, so she wore colorful, discarded clothing with no particular order or schema. She had style—it was just not like anyone else’s.

Zettle was also blind—her family unable to afford, in this age of hyper-tech and planetary exploration, to buy her mechanical replacements. Naturally, this made her cliff-hurtling curiosity more dramatic (or hilarious) depending on the circumstance.

This is my depiction of her:

Maeb’s other companion would be a blond, sensitive, super-genius named Nord, who would function as the anxious, cautious, “I don’t know about this you guys” comic relief.

(You could apply psychoanalyze this. Zettle as the id, Nord as the superego, and Maebs as the pragmatic “can-do” ego in-between.)

I wrote a script and Phil put together an animated storyboard for Nickelodeon, hoping they might pick up the series.

Nickelodeon said no, and we put Mudball away, moving on to other projects. But I have already begun to transform this concept into a far more serious novel, returning to the savage intensity that Golding intended. As this draft comes along, I will put out updates about concepts and characters.

For now, I hope you enjoyed my trilogy of posts about a failed webcomic and cartoon. Feel free to contact me with your failures, and we’ll revel in our misfires together. 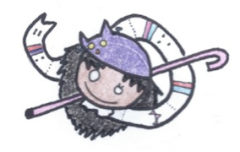